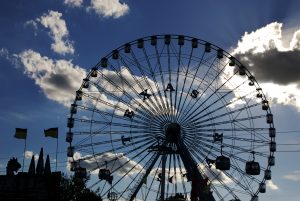 Fall is in full swing, and now the weather finally feels like it. Have you been to the State Fair of Texas yet? The Fair is a great way to feel the fall weather and get the feel of the season. The State Fair of Texas established in 1886, has been going strong for over a century. The Fair lasts 24 consecutive days, which makes it the longest-running fair in the nation, as well as one of the largest. Over the years, the Fair has evolved but continues to maintain the original purpose of education, promoting agriculture, and community involvement through quality family-friendly entertainment. Over the 131 years of the fair, each year has its very own theme. The theme for this year of 2017 is “Celebrating Texans.” As 2017 is the 100th anniversary of America entering the World War I. The Fair will have special exhibits honoring this fact, as well as honor Texans that may have contributed to the war efforts. The Hall of State will feature the exhibit, “Texas in the First World War,” which will give an in-depth look into the roles that both Texas and the United States played during the first World War. As always, the Fair will have loads of fun activities for the whole family. Along with the classic Midway games and rides, there will be special fun events. Xpogo, the extreme sports show featuring pogo professionals, will be back again this year with a daily Xpogo performance in Chevrolet Park Plaza. The Chevrolet Park Plaza also hosts the Lords of Gravity extreme basketball team. The Texas State Fair would not be itself without some fried food. Some of he 2017 Big Tex Choice awards winners like a funnel cake bacon cheeseburger and a deep fried chicken noodle soup on a stick. If going to the Fair is a tradition for your family, the time is here.