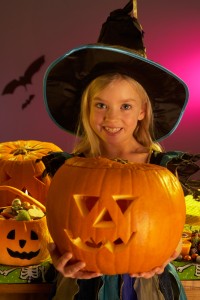 Today, many dentists are pondering what abuse their patients are inflicting on their teeth with the abundance of candy that dominates the Halloween holiday. In fact, the day is so candy-centric that one may wonder which came first, candy or Halloween? The answer to that may be hard to find, but what is certain is that knocking on your neighbors’ doors dressed as monsters to demand candy is a fairly new American tradition. The holiday itself, however, has quite an illustrious history. So how did Halloween and candy become bosom buddies? Lake Worth orthodontist Dr. Ciro Cabal explores the historical relationship between the two.

The Origins of Halloween

The ancient Celtic festival of Samhain (“sah-win”) was a Gaelic tradition to celebrate the end of harvest and prepare for the upcoming winter. They believed that on the last day of October, the world of the living and the world of the dead overlapped, allowing the deceased to enter our world and wreak havoc through sickness, famine, and death. Bonfires were a typical setting for the festival, and partygoers wore masks and costumes to blend in with the spirits. Today, the tradition of dressing up carries on, with the additional aspect t of getting free candy.

The leap from spooky ancient ritual to much-anticipated holiday was not a simple one. Although American’s have celebrated Halloween since about the 19th century, candy did not become a part of the holiday until the 1950s. Before then, trick-or-treaters were likely to receive gifts including coins, toys, fruits, and cake. Candy did not become the exclusive Halloween treat until the 1970s, after candy sellers tried aggressively for decades to push affordable and easy-to-deliver treats into the Halloween season. However, this was not the first time that candy makers attempted to dominate a holiday. In 1916, candy promoters decided to push their profit margins during the fall season by attempting to create their own holiday—Candy Day.

Regardless of how the tradition started, today’s Halloween is an inevitable candy onslaught. To learn how to protect your child’s teeth or braces from potential damage, call Lake Country Orthodontics today at (817) 236-7846 to schedule a consultation with your Lake Worth orthodontist. Located in the 76135 area, we proudly serve families from Lake Worth, Azle, Saginaw, Springtown, Weatherford, Haslet, Lake Worth, and all surrounding communities.